How To Make Perfect Card Sequences In Rummy 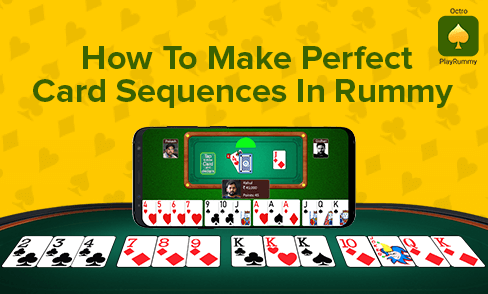 The objective of an online rummy game is to make sequences and sets. The number might vary depending on the rummy variation a player is playing. If you want to become good at the rummy card game you must know different combinations of sequences and sets so that they increase their chances of winning.

As some very valuable rummy tips in this piece, we will tell players different combinations of cards that they can try out to form sequences in online rummy standard variations along with exceptions in case of other rummy variations. Let’s get started:

Sequence Made Of Low Point Cards

Sequence Made Of High Point Cards

Sequence Made Of Picture Cards

These are cards which have a caricature or an image on them. These being K – the King card, Q- the Queen card and J – the Jack card. These cards of any suit can be used to form sequences as well. An example of that would be a sequence is K, Q and J. When players arrange picture cards, for an arrangement’s sake, the numeric value of these cards is J=11, Q=12 and K=13. The points however, that each of these picture cards carry is just 10.

Another option at the disposal of an online rummy player is forming sequences by combining pictures cards and number cards in ascending or descending order till the time all are of the same suit. An example of that being a sequence formed using cards 10, J and Q of diamonds.

A sequence is called a real sequence if a joker card has been used to complete it. A joker card is usually a replacement of a card that isn’t there in the sequence. A player may use blanks, joker cards or pulled-out jokers for the same purpose.

While playing a 21-card rummy game online where there are three or more decks being used, a natural or pure sequence can be formed slightly differently. It can be formed using a combination of three cards of the same suit and value. An example of that would be a player combining three cards of 10 diamonds to make a pure or natural sequence.

Last but not the least, before a player downloads a rummy game on the phone to play online rummy, they need to know all the rummy rules which are used to make sequences. Once that’s done forming sequences during the game shouldn’t be a problem. Having enough knowledge about rummy rules prepares a player to analyze a hand while arranging the cards in the right order. Sequences play an important role in all variations of rummy. Hence it is imperative that a player must be good at forming sequences before they decide to play online where real cash is involved.