Want to play rummy? Learn all the rummy rules!

Rummy is a very old and popular car game Earlier it was played offline but with the advent of technology and internet it is now played online as well. The online rummy rules are very similar to the offline game. Like on the PlayRummy app, the game is played between 2 to 5 players and each player is dealt 13 cards. For 2 or 4 players, two 52-card decks (104 cards) and 4 jokers (wild cards) are used. For 5 players, three decks (156 cards) and 6 jokers are used. Each player in clockwise order deals the cards on their turn but the key is to remember all the rummy game rules.

How to play rummy?

It is to form Runs (or sequences) and Sets. And when a player has formed required runs and sets using all the 13 cards, the player declares his/her turn. According to PlayRummy rules a valid declare must have minimum two runs and out of these runs one run must be pure (called First Life). The second run can be pure or non-pure (called Second Life). Either the First Life or Second Life must have 4 or more cards. Once the objective is met the player can tap on the ‘Declare’ button.

If a player drops from the game without picking any card from the discard/stock pile, he/she loses 10 points. If the drop is in between a hand, before any other player has made a valid declare, he/she loses 30 points.

After the points for everyone is calculated, the winner gets the prize money.

Some online rummy rules to remember:

What’s a Sequence or Run?

It’s group of three or more consecutive cards of the same suit. Rummy card rules say thar in 13 card rummy sequences are of two types. A Pure Sequence and an Impure Sequence. 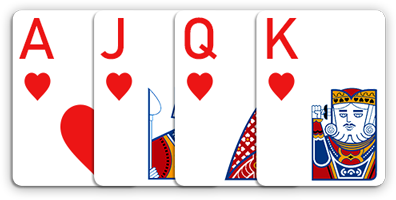 While playing with three 52-card decks, the three cards of same rank and same suit are treated as pure sequence/run. For example: 9♥ 9♥ 9♥ and J♠ J♠ J♠.

It is when a printed joker or a wild card is used to create a sequence. Let's assume K♥ is a selected Wild Card. 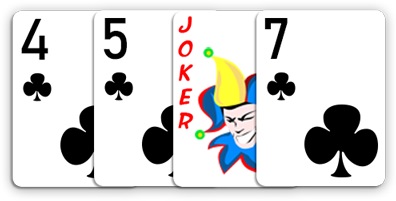 What is a First Life & Second Life?

First Combination: Both sequences are pure

Second Combination: One of the sequences is pure and the other impure (considering J♠ is a joker)

Third Combination: Both sequences are pure

Three Identical Cards: Three cards of same rank and same suit are treated as pure sequence/run. For example: 9♥ 9♥ 9♥. This can also be treated as a first life.

What is a Set?

Three or more cards of the same face value but different suits in a row is a Set.

7♥ 7♦ 7♦however, is not considered a valid set. All the cards in a set have to be of different suits. If two or more cards of the same suit are used to make a set of three or more cards, it is an invalid set. (this is applicable in gameplays with 2 or more deck of cards). As you can see two of 7♦ has been used to declare the set. 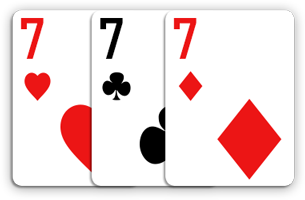 A set can also be built with a Wild Card or a printed joker. Let’s assume the Wild Card is K♥. 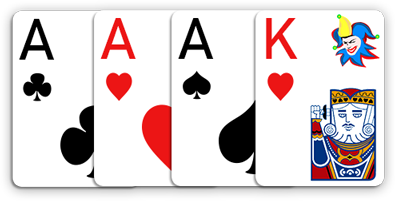 How to use the Joker?

Rule of playing rummy permit the use of two types of jokers.

At the start of each game, a wild joker card is randomly selected. This card can be used as a replacement to any required card after a player meets the requirement of at least one valid sequence.

4♣ 5♣ 6♣ 7♣ - 6♣ has been used to form a sequence. Even though 6♣ is a joker, it’s considered a pure sequence because it belongs to the same suit. (this is possibly the worst placement with a joker considering it is blocked in a sequence reducing its value of wild card) 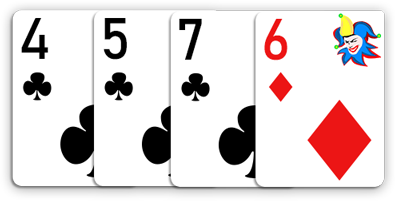 Printed jokers also serve the same purpose since you can use them to replace any other card to form sets and sequences.

A♣ K♣ PJ J♣ - PJ has been used to form a sequence by replacing in space of Q♣. This is an impure sequence using a printed joker.

Note: If the Printed Joker is randomly selected as the wild joker, then A’s of all suits will become wild jokers. i.e. A♦ A♠ A♣ A♥ automatically become the jokers. This is a valid declaration as it meets the objective of the game.

This is a valid declaration.

Example 3: Declaring with Pure and Impure Sets & Sequence Combo PJ is the Wild Joker - (A♦ A♠ A♣ A♥)

This is a valid declaration.

Example 1: Declaring with an Invalid Set

Example 2: Declaring without any Sequence

Example 5: Declaring without a Sequences of Four

After thoroughly go through all the above rules, you can show your skills on Octro PlayRummy. Download the rummy app for a smooth gaming experiencing. This app is available for both android users and IOS users.

This game may be habit-forming or financially risky.
Play responsibly. T&C Apply

We miss you too! But there have been changes in laws & regulations in the State of Andhra Pradesh, Telangana, Assam, Orissa, Nagaland, Sikkim and Meghalaya, whereby by law real money games are not allowed and hence we are forced to restrict users from these states to play, participate or register at PlayRummy. We will get back to you whenever there is any change in these laws & regulations. Please follow our social pages to stay in touch with us!

Login with Facebook
By continuing, you accept you are 18+ & agree to T&C