Learn To Advance Up Your Rummy Game 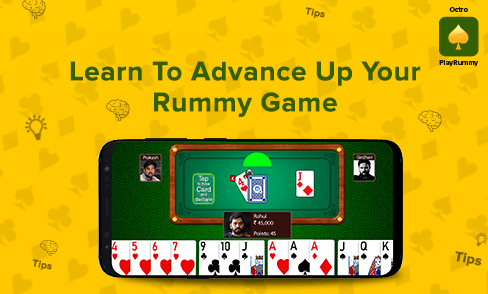 While this sounds simple but it’s also a skill that you master over a period of time. It’s a good rummy strategy and something every rummy player should adopt. When the cards are arranged properly, the player will have a clear overview of what they are dealing with. This also helps a player to keep track of what cards they need next. So, cards should always be arranged by their colour, and not by the numbers. The cards should be grouped with alternative colours to differentiate easily what will suit. Arranging like this will refrain a player from discarding a useful card from the hand. Players should keep rearranging their cards, as this gives them a good idea of when they can finish the game.

Learn How to Discard Card
In rummy, the objective is to discard all the cards in hand and a player can dispose them of in three ways:

(1) Melding: Here a group of cards are taken from your hand, and placed on the table face up. Two types of combinations can be melded which are known as groups and sequences.

A sequence has three or cards ordered consecutively in the same suit like 4 of clubs, 5 of clubs, 6 of clubs or 8 of hearts, 9 of hearts, 10 of hearts, Jack of hearts.

(2) Laying Off: It’s about adding either one or a few cards to a meld that is already on the table. So, the cards added to a meld further should make another useful meld. For example, to 4 of clubs, 5 of clubs, 6 of clubs, a player may add 3 of clubs or 7 of clubs.

(3) Discarding: Here, you player plays a card on top of the discarded pile from their hand to throw away 1 card at the end of every turn.

Pure sequence is a combination of consecutive cards from the same suit but without Jokers.
Figure out the likely combinations available. Then, check if there’s a pure sequence. If there isn’t any, players should start building a pure sequence because this will lessen the load of points
Doing this will boost your chances of winning the game so do it as soon as possible. It will also ensure that you don’t get the sum of all points of all cards in your hand lest your opponent declares at any time.

Don’t keep high point cards like Ace, Kings, Queen and Jack for long if they are giving you desired sets. Hoarding them for long can increase your points burden lest your opponent declares before you. Hence it is always good to relieve yourself of that burden.

The more Jokers a player has in rummy the better will be their chances of winning the game. The trick is simple if you already have a pure sequence, use the available Jokers to complete your second sequence. If you already have two sequences, then put your Jokers to work to first make sets/sequences with high point cards. Advantage of using a Joker is wasted in a pure sequence; hence always try to avoid using them there.

Another rummy trick that you can use is to discard cards which are close to Jokers. If a player has a J of heart as the Joker, then they can get rid of cards like K and Q of hearts. The opponent most likely won’t pick such cards as they wouldn’t want to use it and waste it to form a pure sequence. This is a brilliant rummy strategy, which is usually used by experienced rummy players.

Be it in online rummy or offline rummy most players want to get rid of high value cards during their first few moves. However, if you as a player get two closely related high cards, then don’t discard them right away. The opponent might discard one of your connecting high cards, which can be useful for you to make a sequence. If this rummy trick doesn’t yield the expected result in the first few moves then you can discard your high value cards to avoid a penalty of lots of points.