how to play, Rummy Passion

How To Play Online Rummy on Octro PlayRummy App? 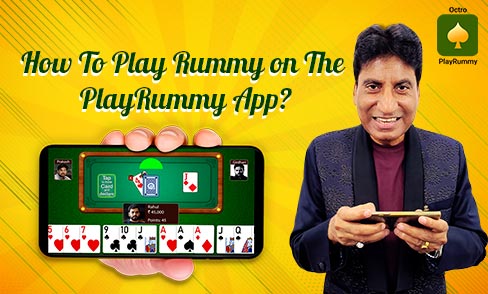 Over the past two decades  rummy game has become really popular. With the internet and smartphones came a lot of game makers who made gaming apps to play rummy online. One such maker, Octro Inc, came up with its version as well and called it PlayRummy. If you have never played the Indian rummy game online, in this blog, we will tell you how to play rummy on the PlayRummy app and win lots of real cash rewards.

Basic Rummy Rules – First this first, let us clear that online rummy is very similar to playing rummy offline with physical cards. It is played between 2 to 6 players. According to rummy rules each player is dealt 13 cards. A random card is selected as the wild Joker and all the cards of the value become wild Jokers in the game.

For a player to win, all 13 cards have to be arranged in sequences, or sequences and sets. The player who is the first to make a valid declaration is the winner.

Now that you know the basic rules of rummy the next step is to download the rummy app on your device. It is available for both Android and ios users. After you have done this, it’s recommended that you watch the video tutorial in the app to have a better understanding of the game.

The next step is that every online rummy player who plays on this app will understand certain terms and their importance in the rummy game. These terms are sequence, sets, joker card and declaration.

It’s a group of three or more consecutive cards of the same suit. There are pure and impure sequences.

Pure Sequence: In a pure sequence there are three or more consecutive cards of the same suit. Here no card can be replaced by a Joker. Also, it is a mandatory combination required to make a valid declaration.

Impure Sequence: Two or more sequential cards and a Joker can form an impure sequence. The Joker acts as a replacement for the missing card in the sequence.

Three or four cards of the same rank but different suits make a set in rummy game. A set cannot have more than one card from a suit. One or more Jokers can replace any other card(s) in a set.

There are two types of Jokers in rummy play:

Printed Joker: A printed Joker card has the picture of a Joker printed on it. This card can be used as a replacement for any missing card and can help you form a set or an impure sequence.

When you declare your hand/cards without fulfilling the conditions shared above, it’s an invalid declaration.

Explore the Offers: It’s recommended that before you play rummy on the PlayRummy app you go through all the offers that might be useful for you. Once you have completed all the above mentioned steps you would be ready to begin playing rummy.