How To Start Rummy Game As Beginner 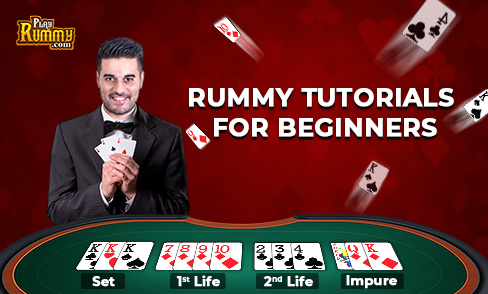 Rummy though is a very popular game but still people find some rules confusing. So, if you want to play rummy but all this while have been struggling with the rules of playing the rummy card game. Let’s get that sorted for you first. This will help you enjoy the game on your favorite rummy app PlayRummy. Below is the detailed explanation for beginners on how to play the rummy game online and excel at it.

Players & Deck: Online Rummy is played among two to five players and each player is dealt 13 cards. For two or four players, two 52-card decks (104 cards) and four jokers (wild cards) are used and for five players, three decks (156 cards) and six jokers are used. Each player deals the cards in clockwise direction.

Next, a card is picked from the stock pile and placed face up under the stock pile so that it is visible. All the cards of that rank regardless of the suit can be utilised as additional jokers or wild cards.

The objective of the playing online game is to form sequences and sets. When a player has done that, the declaration can be made.

Sequences: These are of two kinds of pure and impure. A pure sequence are three consecutive cards of the same suit. When playing with three 52-card decks, the three cards of same rank and same suit are also treated as pure sequence. It is an impure sequence when a printed joker or a wild card is used to create a sequence.

Set: A set is considered a pure one when three cards are of the same rank but of different suit. If two or more cards of the same suit are used to make a set of three or more cards then the set is not valid. This is applicable in gameplays with two or more decks of cards. Though a set can be built with a wild card or a printed joker.

Jokers: There are also two types: wild joker and printed joker. At the start of each game, a wild joker card is randomly selected. This card can be used as a replacement to any required card after you meet the requirement of at least one valid sequence. Printed jokers also serve the same purpose since you can use them to replace any other card to form sets and sequences.

Valid Rummy Declaration: A valid declaration in online rummy game can be made in different ways:

The second form valid rummy declaration can be declared with pure and impure sets & sequence combination. The objective of the game is met by having at least two sequences, out of which one is a pure sequence and one has four in a sequence.

Wrong Declaration: The declaration by player will be considered wrong if a player declares without forming a pure sequence. Same way declarations are made without any sequence or when a set is formed with the same value card of the similar suit.

Dropping from the game: If a player wants to drop from the game without picking even a single card from the discard pile or stockpile, the player will lose 10 points. If he/she drops in between a hand, before any other player has done a valid declaration, they stand to lose 30 points.

How to win in rummy: When a player has arranged all the cards in hand in either proper sequences and/or sets, including one pure sequence, they need to declare the game by discarding one of their cards to the declaring slot. After that is done, they need to rearrange the cards in proper sequences and/or sets to show them to their opponents and wait for them to show their respective hands.