Bad Rummy Moves That Can Ruin Your Game

Posted by PlayRummy on September 3, 2021 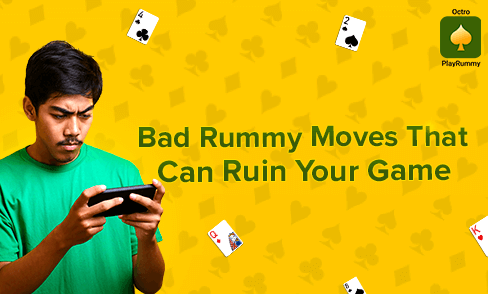 Indian rummy card game is all about strategies and moves that a player makes based on those strategies to win. Whether a player will win or lose in a rummy game is dependent on the moves he/she makes during the game. The person who forms the sets, sequences first and makes a valid declaration wins the game. It sounds easy but most players make wrong moves which results in them losing the game. Since there are certain common mistakes that can ruin your game let’s explain what they are which you should avoid especially playing a real cash game.

Not Knowing the Rules: There are many online rummy games and basic rules for most are the same. However, there might be certain exceptions for certain games or tables. Hence sometimes players assume that all games have the same rules and start playing only to know later on that they should have gone through the rules completely and not assume that they know all. By then it’s too late to come back and win the game. So, it’s always better to know the rummy rules than regret later on.

Not Arranging Cards Properly: Players who don’t arrange their cards properly struggle with managing time in the rummy game. Arranging cards properly helps in concentrating on the game better. It also saves time to focus on moves as you will not be confused about which cards to pick and discard. A good way to arrange your cards effectively is to alternate the colours. Make a perfect rummy card sequence will help you to make strategies quickly.

Playing in Haste: There’s a saying; haste makes waste. If you are trying to play a game when you don’t have the time then avoid playing. Every move is important hence players should take their time making every move because haste usually proves costly.

Lack of Focus: While you might be playing the rummy game but mind can be wandering and not paying attention to the game. This will make you miss moves that your opponent could be planning. You might also make mistakes while making your moves resulting in ruining your game. Hence it is extremely important that the player is completely focused on the game when playing.

Holding High Value Cards for Too Long: A common mistake many online rummy players usually make is that they wait for too long to discard cards with higher points. These cards are usually the face cards and Ace as well. Learn importance of ACE in rummy game. It is vital for your chances in the game to avoid doing that. This will ensure that if your opponent declares before you do, your loss points are reduced.

Not Going for Smart Cards: When playing a real cash game in online rummy the winning hand often belongs to the first person to meld their cards. These cards are called smart cards because they can be easily converted into a run. Cards such as 5,6,7,8,9 of the same suit are smart cards and can be used in a number of different combinations. So, if you aren’t looking to make full use of these smart cards you are messing up big time.

Not Holding On To Your Jokers Tightly: Joker in rummy is one of the most powerful cards. Hence it is vital for players to make the best possible use of it and not get rid of it quickly. Once discarded it can’t be picked up again so, a golden tip is that one should always use of joker in rummy to complete a run or set of higher point value. The focus should also be to not use the joker card in a natural run.

Chasing Losses: Taking emotional decisions in the game can’t be called rummy passion. So, players who chase their losses playing rummy are likely to ruin their game and money. When a player plays with the intention of recovering the loss suffered in the game previously, he/she isn’t exactly focusing on the game practically but emotionally and that’s never recommended. Players should play rummy with self-imposed limits. They should never ever go overboard and play more than one’s risk handling ability and capacity. If you have lost cash, don’t just play to recover your losses. Chasing your losses can make the losses even bigger. The best approach in such a scenario is to take a short break, analyze your game, assess your rummy strategies and then play when you are in the right frame of mind.

Making An Invalid Declaration: Declaration is the final step in a rummy game which decides the winner. If a player makes an invalid declaration all the hard work in the game is of no use. Making an invalid rummy declaration can make the players lose the round with 80 points. This can be avoided by regularly shuffling the cards.