Offensive vs Defensive – Which Rummy Strategy is Best For You 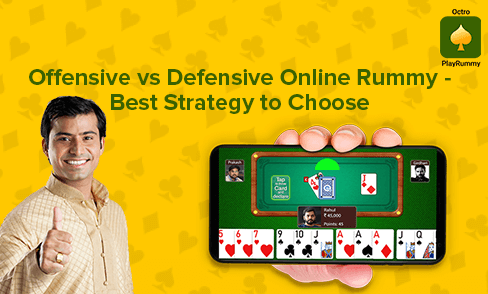 In Classic Rummy games there are two kinds of approaches to win a game, but if you are a novice or a beginner it is expected that you won’t know much about these. In fact, when rummy players who don’t have much experience begin their playing journey, they are unlikely to have a strategy or a pace. The main motive for them is to somehow survive and win the game.

It is only after playing a considerable number of games on the rummy app will a pro player understand the rummy rules completely and learn a few tricks of the trade. To apply these rummy skills are also not a cakewalk. A lot of strategies are made so that the trick that a player has learnt gets him the desired result.

The end goal for all rummy players is to form valid sequences, set and declare their card before the opponent does the same. However, to achieve this end goal players need to shortlist an approach or pace before making their move. This pace or approach can be offensive or defensive in nature.

Most rummy players adopt one of these approaches, however, a few good ones know how to mix both and adapt their game according to the situation. But one who can combine both these and form strategies according to the situation are the ones who are most successful. To find the correct balance between offensive and defensive approach in Online Rummy Games isn’t a child’s play. It requires a lot of practice, patience and persistence. However, if you are a new kid on the block and have a rummy passion in you, it is important for you to understand the difference between offensive and defensive approach in  rummy culture.

As the name suggests it is an attacking approach. If a rummy player goes for an offensive approach, it means he has to attack the opponents. An aggressive approach requires that the player be proactive and well-equipped with all rummy moves. The approach is easy to adopt for players who play regularly and have enough games under their belt.

To master this approach, passionate rummy players need to keep a regular watch on the cards the opponent is picking from the discard pile or discarding. Based on this observation, the player should discard his cards carefully to fox the opponent.

An offensive approach is helpful in making better decisions with effective time management and observation skills. A player who goes for this approach has a sharp memory and the skills to use different strategies to attack the opponents. Though it is recommended that the player should never over indulge in the same moves and rummy tricks to prevent your opponent from predicting your approach.

What is a defensive pace?

Allowing the opponent to set the tone and pace of the game is usually the last resort. This approach is usually adopted by submissive players in real cash rummy game. Hence it is recommended that if you have a good hand go for the offensive approach. A player can adopt the defensive approach when they have got irredeemable cards. Learn how to advance up your rummy skill to win big games.

Which approach should a rummy player adopt?

Players can also mix these approaches in case they aren’t sure about one particular approach. A player that chooses to go all out on the offensive or defensive play, tends to lose control in the long run. If a player wants to improve their rummy skills with every game and become one of the best in business, they should follow the middle ground. This implies playing according to the situation and adapting the strategy that the situation demands. Therefore, if you as a rummy player find going all out in any one of these approaches try to balance the two. Try using a combination of both the approaches to flummox your opponent the next time you play a game of Octro rummy.