Did You Know, Rummy Passion 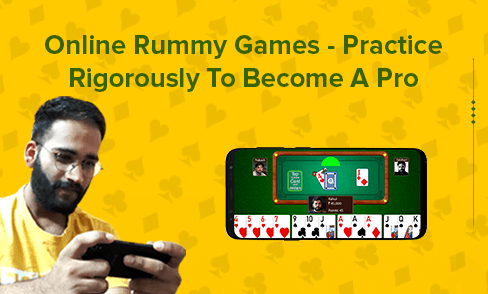 Players usually want to go for quick fix and shortcuts to win games of online rummy however those can’t be long term solutions because if you want to become a pro rummy player rigorous practice is the only way to progress. Everyone who plays rummy online wants to win, however, not everyone does. Those who want to win more consistently than others and turn pro rummy players the mantra is practice. As we all know rummy is a game of skill and that can only be hone with consistent effort on the players’ part.

Practicing in online rummy is also hassle free unlike offline rummy where a player needs to find out other people to play with. In Play rummy you can play the game anytime and anywhere. Let’s go through all the aspects of practicing and how it can be beneficial in a rummy player turning pro.

A person can talk a lot about any work and how that can be done but the real test of it is in actually doing that work. Knowing how to do something and actually doing it are two different aspects. Theoretically knowing about something has no value if you can’t implement it practically. To implement your moves perfectly in an online rummy game, practice is the key. Only after rigorous practice can a player predict all possible outcomes of a move. Hence, just having knowledge about an aspect doesn’t always get the job done.

Practice can make a player adept at playing the game. It is always good to play rummy game online with someone who knows their cards. Rather than coming across as a player who doesn’t know the game others on the rummy table will take notice of you as someone who knows what they are doing. Practicing regularly will help a player come up with good rummy strategies that could turn the game in their favor.

When players know they have put in a lot of effort in practicing the game they will have more confidence about it. As a player if you have done the hard yards and trained your mind to deal with any situation that the game presents then when you actually face a challenge in the game you are more likely to come out of it as a winner. All professional athletes and players train hard to deal with difficult scenarios and it is no different for players who want to be pro at rummy. Rigorous practice is the one of the steps to keep improving your game and raising your confidence level.

Practice Keeps You In The Zone

Good rummy players play with extreme focus. When you ask them how they do it more often than most others they will tell you that when they play there are in a zone. Being in the zone is nothing but being in the correct frame of mind while playing. When a rummy player is in the zone, they are less likely to make mistakes and they can predict their opponents moves. This state of mind can only be achieved by practicing the game day in day out. The more a player practices, the more he is able to go into that zone while playing. Those who don’t practice it is difficult for them to experience this zone because most of their time on the rummy table will be spent wrapping their head around unfamiliar moves and being surprised by what the opponents are doing. When players are in the zone, they don’t feel over awed by their opponents moves.

Intuition is nothing but an ability or a sense of predicting an outcome before an event actually happens. Online rummy players who want to turn pro would have heard this before. If you want to predict your opponent’s moves then knowing how to play a good rummy game is very important. And being good at the rummy game or being a pro at it can only happen with practice. The reason behind it is simple, because once a player has performed an activity countless times, they no longer need to think of it consciously because the neurons and synapses are used to it. All professionals in their respective area of work develop this intuition with time and consistent practice. Once the brain is accustomed to an activity, predicting the outcome will just be a by-product. If you can play rummy online with dedication, your intuition for this game related stuff will improve.

Someone rightly said a long time ago that without practice and effort no talent can reach its optimum performance and the same goes for rummy players who want to turn pro in the game. Keep practicing to make your game better and the rewards will follow because practice makes a man perfect.