Sometimes Dropping Out of a Rummy Game Is Wise 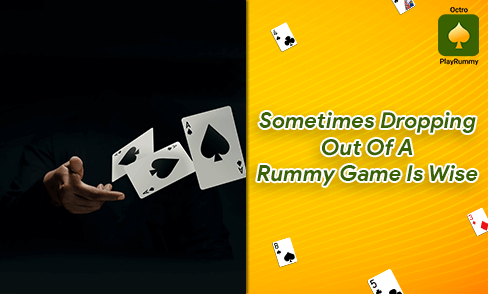 All those who understand and play rummy know that it’s a game of skill. It’s a game where players execute various rummy strategies which they have worked on. To play Indian rummy like a pro and do well in the game a player must understand which rummy game plan to execute when so that they get the results in their favour. One of these master plans is to “drop out of a game”. Yes! You read it right, sometimes dropping out of a rummy game is a wise step which players need to take for various reasons. Here we will explain some scenarios when players must consider dropping out of the game.

Be it online rummy or offline rummy players don’t always get a great hand to meld. There are times that the hand dealt is so poor that it is almost impossible to make a pure sequence. It is in such a scenario that a rummy tip like dropping out is considered by many players. If you as a player face such a situation where the cards dealt are of no use take a moment, examine if you can somehow make a pure sequence in one or two moves. If the answer you get is no then drop out of the game. By doing this you will save yourself from being with more points. Since while playing rummy online it’s not always required to play every hand it will force your opponents to think about your game plan as to why you would have dropped out.

No Pure Sequence or Joker:

While playing Indian rummy you will come to know that a pure sequence and joker play a vital role in determining how well you will do in the game. If you are neither able to make a pure sequence with the cards that you possess nor do you possess any Joker, then dropping out is the wisest decision you can take to save yourself from losing with more points.

Got A Pure Sequence but No Joker:

Another important rummy tip with regards to dropping the game is when a player possesses a pure sequence but  no Joker(play Rummy without joker), then he/she can still go for a drop. This is something players must consider when they opt to drop the cards as it might be highly improbable to meld any sets or sequences. By making this move, players may reduce the load of penalty rummy points.

Got Joker but No Pure Sequence:

The basic 13 card rummy rule is to form a pure sequence to stand a chance in the game. However, if a player is not able to make a pure sequence in one or two moves, the probability of him winning the game reduces drastically. In such a scenario, the player could drop the cards and save himself before the opponent declares the cards.

As players learn more about playing rummy, they realise sometimes it’s almost impossible to meld sets and sequences. When playing online rummy, dropping in the middle termed as the middle drop is the most effective approach and strategy. If players feel at any point in time that their current score is more than their middle-drop score, then it’s better to declare a drop. Making this move will help you reduce the points.

Now that we have explained some very likely scenarios that online rummy players face where they should consider dropping their cards, you should experience it by playing rummy, the best rummy app. Sometimes, the best rummy strategy is not to play but for you to experience that you will first have to experience it by playing a game. Also, there might be other scenarios as well where players can consider dropping cards. Before making this move make sure you are executing this rummy strategy in the correct situation.